I was bullied in school. I’ve always felt different in comparison to my friends and family, but this difference was exacerbated during my middle school years. I grew up in West Philadelphia and went to a public school down the street from my house. The surrounding community was predominantly Black and upheld a standard of what they believed Black should look, sound, and feel like. I did not meet that standard.

According to them, Black people were supposed to wear the latest fashion with Jordans or Nike shoes. Black people were supposed to wear cool basics and graphic hoodies, stay on top of cultural slang, and debate the sound engineering of hip-hop albums. I listened to Japanese rock and Bollywood music. I often dressed in vivid colors with varying patterns on them. I loved polka-dots, Sailor Moon, reading, wore off-brand K-mart shoes, and was very sheltered. My mom prioritized my education and  innocence from the harsh realities of the world. I was therefore not allowed to hang out with friends or have a cell phone until I was in my first year of highschool.

People would always say, “You talk strange”, or “You talk white” and call me names because of how I spoke and dressed. There was one bully in my middle school that everyone was afraid of. She was known for picking fights with everyone in school and beating them to a bloody pulp. She was also in a few of my classes. She would tease me about how I dressed, called me “oreo” (an offensive term meant to invalidate someone’s blackness), and pressured me to do assignments for her in class.

In an instant the bully pushed me hard on the ground. I thought I was going to die. “Wait!” I yelled as I tried to get up as she continued to push me to the ground with force that knocked the wind out of me. I wondered where the school staff were to separate us. “It was an accident! I didn’t mean to hit you. I’m sorry! It was an accident!” I yelled as desperately as I could. Finally hearing my words, she looked down at me with an indecipherable look and turned on her heels, leaving me to get to my feet.

“All right, all right. That’s enough. Everyone line up” a staff member yelled toward students as  I dusted my pants off.

I wondered if the staff simply watched as I was continuously pushed to the ground. Would they have continued to watch had the bully punched me, kicked me? The bully had walked off toward the other end of the school yard to rest, ignoring the requests for students to line up. She behaved as if the school, its students, and staff were all in the palm of her hand.

When I think back on that day, I really believe I could have died that day. What shakes me to my core is that kids these days have it much worse. With the advent of smartphones, social media, and life itself being compressed into the varying screens we look at in a day, it is difficult to escape harassment and bullying. So much so, that cyberbullying has become a serious problem for our youth.

Aside from lowering academic performance, bullying can cause anxiety, low self-esteem, and depression. Post-Covid there have been higher rates of such issues:

“The COVID-19 pandemic has led to an increase in kids and teens using digital platforms, not just for personal use, but for education purposes as well […] there has been a 70% increase in cyberbullying in just a few months.”

Other factors contributing to the increase in cyberbullying are:

Oftentimes, bullies suffer from the same issues their victims suffer as a result of being bullied. As advocates for mindfulness and wellness Inner Strength works to act proactively, encouraging self awareness, intentional communication, and meditation in order to mitigate bully behavior and other maladaptive behaviors and thoughts.

Although our reach does not yet extend beyond the classroom, we are working to provide students with safe spaces, afterschool programs and the skills to combat the anxiety and stressors of youth. I know I wished I could have had support while being bullied – a place to share my concerns and have them be heard. I wished there was someone there to remind my bully of the humanity of people. Maybe she would have been kinder to others and kinder to herself. 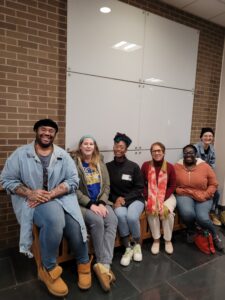 The Inner Strength Education team was invited to the Community Violence Intervention (CVI) seminar at Temple University, discussing the importance of mediation and violence intervention 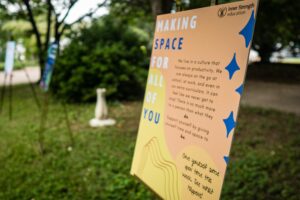 Love and Kindness: Reflecting the Purpose of Giving Tuesday

One of the lessons students are really touched by in the Inner Strength curriculum is when they learn the Love and Kindness practice. This lesson 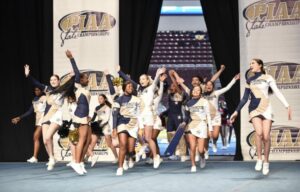 In September, George Washington High School became the first in the district to have their cheerleading team qualify for the national championships. Led by health